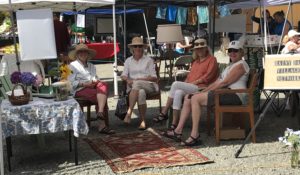 Rainy Day Village Network is organizing to provide community-wide (Rockaway Beach to Arch Cape) volunteer services based on the concept of “neighbors helping neighbors” of all ages.  The national Village movement initially formed to allow seniors to confidently age in their homes through a network of neighborly support. They are working to become a program of Villages NW, the regional, Portland-based organization. 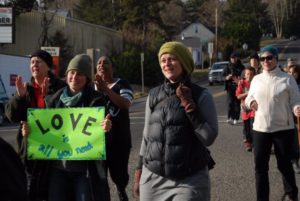 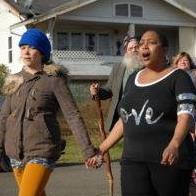 The Love Coalition – Shown above on a January 2017 March for Martin Luther King, Jr. Day in Nehalem.

A second MLK Day celebration happened in 2018 – A whole weekend of events culminating in a day of service.  “This MLK Day community members, family, friends, and strangers came together for one reason: The Power of Love. Three families in need were served during the 1st Annual MLK Day of Service in conjunction with The Love Coalition and Habitat for Humanity’s Ramps & Rails Program serving seniors, people with disabilities, and veterans in need of in-home safety modifications. Watch this video to see the final product when Love is put into action….”  The event was covered in both the Daily Astorian and the Oregonian.

In response to a Fall, 2017, racially motivated graffiti hate crime in Nehalem, they are organizing bi-monthly “Let’s Talk About It!”groups and working with the schools for cultural diversity training and programs. Donations can now be made to Fulcrum in their name. 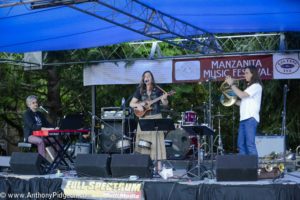 MANZANITA MUSIC FESTIVAL  – There have now been two successful years – 2016 and 2017 – of this July weekend festival. They also are raising money for band instruments in the Neahkahnie School District. Fulcrum is the fiscal sponsor so our 501(c)3 status helps them in their fundraising efforts. 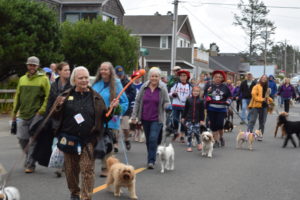 MUTTZANITA – Fulcrum is the fiscal sponsor for this fun annual event.  It’s all about the dogs! Proceeds from the event are donated to Animal Haven By the Sea, United Paws & Tillamook Animal Shelter. 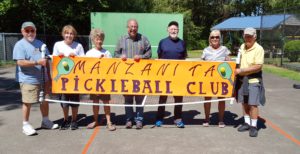 MANZANITA PICKLEBALL CLUB – A group of pickleball enthusiasts are raising funds for a resurfacing of a combined tennis/pickleball court at the Manzanita Park and are hoping for up to four dedicated courts on City of Manzanita Property near the water tower. Fulcrum is their fiscal sponsor. 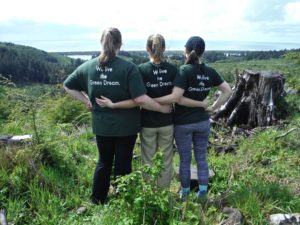 ROCKAWAY BEACH CITIZENS FOR WATER PROTECTION – A group active in educating the public about health and safety concerns of clearcutting in the local watersheds. Fulcrum provides 501(c)3 status for contributions.

Noah Chick, at right, helps Smiley Brothers volunteer coordinator Laura Swanson with the first haul of fish for 2014 from the Waterhouse Falls trap on the North Fork of the Nehalem River.

SMILEY BROTHERS – In 2015, Fulcrum was asked to take over financial management of this highly successful project of reclaiming salmon, canning it and making it available to folks needing high quality protein.   Report from Mike Ehlen for 2016: This has been an exceptional year with ~ 560 fish captured, filleted, frozen and ready for canning, labeling and distribution. Our two senior assisted living facilities- The Kilchis House and The Nehalem Bay House have already been recipients of ~ 90 fish (Jack Salmon)- fresh from the river. The rest we are hoping to have canned by the end of the month and in the food banks by December. We are also very pleased to report that the good folks at Skipanon Brand Seafood will be doing the canning this year at cost. Much thanks to Mark Kujala and his family for stepping up to the plate and helping when we need it! www.skipanonbrand.com But wait, there’s more good news. The Port of Nehalem has offered to match contributions up to $5,000 this year! So, for this season our goal is to raise at least that amount to offset processing, canning and labeling costs. Thanks goes out to The Neahkahnie High School students and teachers involved in the project. They’re on task for this years’ can labeling and help with distribution as they have been since the inception of the Smiley Brothers project.  Thanks again to Derek Wiley and the ODFW team for your usual great and demanding work handling the massive amount of fish going through the Waterhouse Falls trap. Thanks also to all our volunteer haulers, The Eugene Schmuck Foundation and everyone that’s contributed time and money this year. A special thanks to Laura Swanson for spearheading the project for the second year in a row. Nice work Laura!